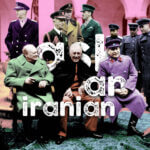 Ask An Iranian
Why do Iranians think we're better than them?

To Iranians, ze Germans are foreign, but ze Chinese… well, they’re just Chinese! It’s the same with many other nationalities and ethnicities for Iranians in Iran — some are foreign and some are just themselves. This type of categorisation tacitly exists and is just… discriminatory. Yes, it’s kinda racism, but the good kind, right! Iranians will hold certain peoples in high esteem and although they won’t make their prejudices institutional, they will bestow privilege to those deemed foreign. Enraged? Don’t be! Allow us to explain how it is that Iranians can be racist, kinda.

Throughout this episode, we also provide anecdotes from various foreign friends of the show. They were kind enough to share their stories of how Iranians have judged them as foreigners. These stories were provided by aBrazilian, a Brit, a Syrian, and an Afghanistani. Most of their experiences were positive, but no prizes for guessing which of them experienced the opposite.

So, go here if wanna read more about why Iranian love foreigners, but only certain foreigners?