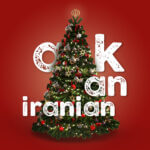 Ask An Iranian
What's it like being Christian in a Muslim nation?

Jesus Christ! We love him! Muslims love him! He’s one of the prophets that we Muslims recognise. In fact, in the Quran, he gets mentioned by name 25 times, making him the most mentioned person in the holy book. You might also be surprised to hear that communities of Christians live among Muslims in Iran — yup! Jews too… but we’ll save that for another time. To help us learn what it’s like to be a Christian in a Muslim nation, we called on a Christian — not just any old Christian though. We called on a priestess, no less!

Kirsten Wolandt is a pastor at the German Speaking Congregation in Tehran and regularly runs services to a mostly-German expat community in Iran. She agreed to join us for a chat about her experiences of being a Christian in a Muslim nation. During our discussion, we spoke about the many similarities and differences between Christianity and Islam. We also put the priestess’s carols singing skills to the test and sang a song for the occasion of Christmas.

Questions we also get answer to in this episode

Image credit: picture of a Christmas tree with the symbol for the Islamic Republic of Iran sitting up top, created by Ask An Iranian, 2021.