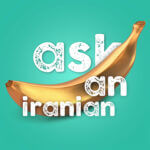 Ask An Iranian
Are all Iranian men mummy's boys?

In Iran we don’t refer to somebody as the special child of a family — we refer to them as the golden willy. And, we think that’s cute, if not a little sexist. Fret not though dear sisters, because this is not considered a compliment. A golden willy, or“dodool talā” as we say in Persian, can also be described as a mummy’s boy. For a gender-neutral term, we say “bache naneh” to imply that a person is spoilt. Now, are there multiple terms in Persian for this because Iranian men are mostly mummy’s boys? Seemingly yes — but hear us out.

Once again—and by popular demand—we invited Shanay to join us and share her perspective. Yes, we couldn’t go into a matter concerning Iranian men, without an Iranian women’s perspective. We’re not necessarily suggesting that Shanay knows more about golden willies than we do… but we kinda are.

Don’t just listen to us though! No, no! Among other related questions, we put it out to our Iranian audience and asked them whether Iranian men are mommy’s boys. The results were more frightening than we expected — yes, you were warned. So, wanna know if, how, and why Iranian men have a complex relationship with their mothers.