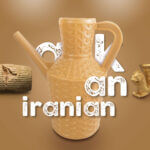 Ask An Iranian
What is the most Iranian thing?

The Americans have obesity, the French have snobbery and the Saudis have hacksaws, but what is the most Iranian thing? To help figure this one out, we called on the help of our audience, and the results… were weird, in parts. We obviously got answers such as Persian rugs, nose jobs, and saffron, but we weren’t expecting so many things related to the toilet.

Image credit: aftabeh with the ancient Persian Cyrus Cylinder from the 6th century BC (British Museum London) and the Golden Achaemenid Rhyton from 5th century B.C.E. (National Museum of Iran) – Artwork by Ask An Iranian, 2021.