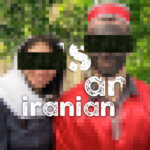 Time—it has been said—is a concept, by which we measure our pain. We’re gonna say it again… time… is a concept… by which we measure… our pain. Now, let’s take that concept (with its accompanying pain) and turn it around. In doing this, we’ve invented celebrations. Some peoples and cultures mark the measurement of time on a seemingly random time-space moment known as January 1st, and others do so on the Spring Equinox. Iran is one of those places, where its people do the latter. Iranians, and other places and cultures, call this celebratory moment, the Nowruz. To help you get familiar with this pain-avoidance mechanism, we bemoan the Nowruz celebration, while embodying Ebenezer Scrooge. So, join us for the “bah! humbuggery!”, and learn a little about the Nowruz, in the process.

Image credit: Pixelated picture of somebody dressed as Hajji Firuz, created by Ask An Iranian.