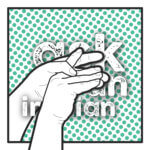 Ask An Iranian
Do Iranians do it louder?

It goes without saying that Iranians invented pretty much everything, ever! So it shouldn’t come as a surprise that the two-handed finger-snap is better known as the Iranian finger-snap. This method of finger-clicking is not only different, in that it requires two hands, but it’s different in that it’s loud! In fact, if you listen carefully, you’ll currently hear several Iranian grandmothers, sat around a room, finger-snapping to Persian pop music, while their grandchildren do the shoulder shimmy. To help you learn more about the Iranian two-handed finger-snap, or the ‘beshkan’, as it’s known in Persian, we devoted an entire episode to it. Listen to us, and friends of the show, give their examples of ‘beshkans’ and listen to learn how you, too, can ‘beshkan’. So, do Iranians do it louder?

Image credit: Picture of Cyrus the Great (contact us for information or credit), edited by Ask An Iranian