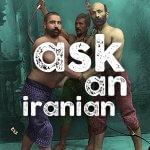 So, we recently learned that you can make a living, sitting on your behind and shooting at virtual characters… even in Iran. To help us get out heads around this, we chatted with ‘Yeggiz’, an Iranian gamer girl, who is doing just that. Unperturbed by the many issues faced by Iranian gamers, she’s been gaming, streaming, and vlogging since the pandemic hit. We invited her on the show to not only help bring us up to date but to also help our audience understand the fun and the frustration of gaming in Iran. So are Iranian girls players? Read more here.

During this episode we also get answers to these questions