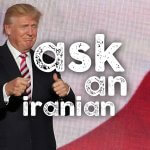 Ask An Iranian
Why do Iranians support Trump?

In this episode, we discuss what happened when 6,769.5 Iranians on Twitter, answered a poll on whether they support Donald Trump or not.

Listen to this episode to find out what happened when we put a poll together and posted it in response to a tweet by TheTweetOfGod, who seemed a little puzzled as to why Iranians would support the American president, Donald Trump. Our poll was seen by just over 60,000 of his 6,100,000 following and was engaged with by around 15,000 of them.

So how did this all come about? Well, listen and subscribe to the show to find out the precise details, or read on for a brief summary.

‘TheTweetOfGod’ is His holiness, personified on Twitter, and although the person behind this begun by tweeting the type of tweets you’d expect of such a character, recently He’s become rather political.  The heavens were seemingly shaking when He saw that an Iranian wearing a MAGA hat tweeted that she was an #IranianForTrump. His holiness somehow saw this as blasphemy and tweeted to Iranians that she is “…making you look really stupid”.

We thought we’d clear this up and put it to the Iranians, because… yeah, we’re Ask An Iranian. So our poll went as follows:

What do you think about Iranians supporting Trump?

Are you surprised by the results above, or is this as you would expect? Please let us know in the comments section below and help us explain why you think as you do?

Ask An Iranian are not associated to any political groups, and unfortunately not funded by anyone either, let alone any political groups, especial one that has a name that begins with ’N’, continues with an ‘IA’ and ends with a ‘C’. We do not endorse Trump, TheTweetOfGod or anyone for that matter. All content related to this podcast, and its promotion, is for entertainment value only. “Beh man che ke”, what happens in America, with the elections, with the candidates and with any of their weird sports. We are not responsible for any influence on any outcome of this whole bizarre moment, so if suffer some kind of mental breakdown upon learning about the results, that’s on you.