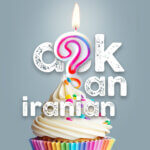 Ask An Iranian
What doesn't happen at Iranian birthday parties?

Celebrations for birthdays are somewhat similar around the world, in that we make a fuss for the ones we love. Yes, every culture makes its own fuss in its own way, so we thought that we’d make a fuss, about how Iranians make a fuss.

If you’re learning about Iranian culture, or happen to be surrounded by Iranians, then learning about Iranian birthdays is kinda important. Knowing how to say “happy birthday” in Persian (Farsi) and when to say it is a good start, but we recommend you learn a little more. Also during this episode, we teach you what gifts to get Iranians on their birthdays, and how they will be received during an Iranian birthday party.

For all the above, and more, be sure to check out this episode.

Image credit: Colourful cupcake with a question mark for a candle, created by Ask An Iranian, 2021.