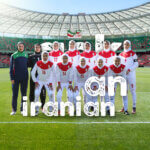 Ask An Iranian
Can women play football... in Iran?

In 2005 our guest, Katayoun Khosrowyar, arrived in Iran, fresh-off-the-boat and completely unaware of how her visit would change the direction of her life, as well as the lives of other Iranian women. This isn’t because she turned up without a headscarf and had to borrow another woman’s, but more because of her role in shaping women’s football in Iran.