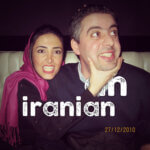 Ask An Iranian
How do I propose to an Iranian girl?

This is Amir, minutes after proposing to the girl that’s grabbing his face. She said yes, and the day after, Amir went to her parent’s house to do it as it should be done in Iran. Don’t be Amir — run it by the Iranian parents first.

Welcome to part 1 of 34 in a series about Iranian marriage. To start things off, we discuss the Iranian courting custom known as “khaastegaari”.

To help us explain almost everything you need to know about proposing to an Iranian girl, we were joined by Amir. He is better known as being the best man for a great many couples when they get married, so he’s quite familiar with the customs both in and out of Iran. Between sharing the story of his marriage proposal we discuss the traditions and customs of this occasion. So to learn about how, when and where you should propose to an Iranian girl, visit here.

Question we also get answers to in this episode

Image credit: Image credits: photo by Amir, of him and Tannaz, post proposal – edited by Ask An Iranian.